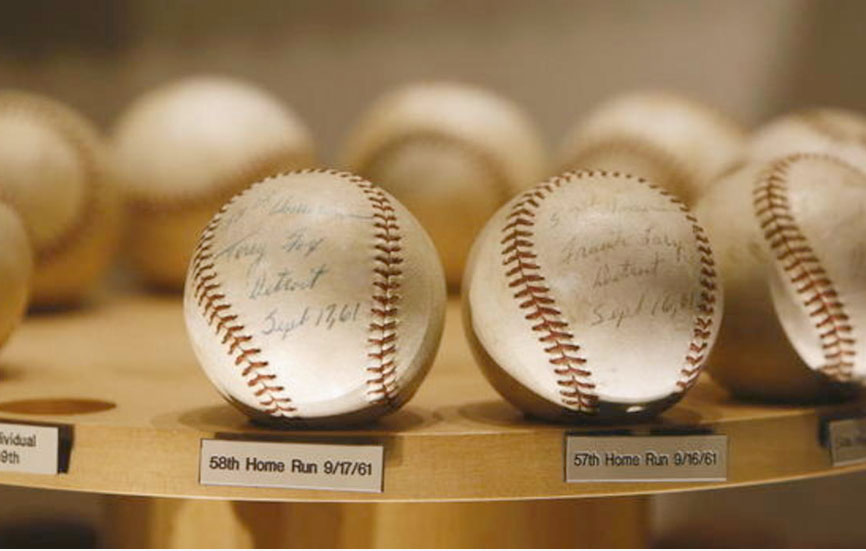 When approached with the idea of creating a museum in his honor, Roger Eugene Maris (September 10, 1934 – December 14, 1985) – who hit a Major League Baseball record 61 home runs during the 1961 season for the New York Yankees, breaking Babe Ruth’s single-season record of 60 home runs in 1927 – declined. An incredibly humble man, he eventually relented but requested that the museum be “put where people will see it.” He also requested that the museum be open to the public free of charge.

The Roger Maris Museum opened in Fargo, North Dakota – Roger’s hometown – in 1984, and true to Roger’s wishes, it is visible, accessible, and free. Located in the Roger Maris Wing near the Aquarium Court at West Acres Shopping Center, the glass-enclosed museum enables visitors to re-live Roger’s legendary life. More than 7,000,000 people visit West Acres every year, and while museum officials don’t track museum attendees, there is almost always someone viewing the memorabilia.

The museum, which was originally created by Bob Smith, Jim McLaughlin and American Legion Post No. 2, was fully renovated by West Acres in 2003. Notable museum features include:

If you have questions about visiting the Roger Maris Museum, contact us.

“Roger treated his friends like one of the family, and when he came to Fargo, he came to see his friends.” – Wayne Blanchard, longtime friend

“While out one night in Sioux City, Iowa, “No one recognized Roger until five minutes before closing. Then we got out of there. But not before Roger autographed a Babe Ruth-autographed baseball for some guy.” – Walt Seeba, brother-in-law

“Roger was just as humble as any human being I’ve ever met.” – Bill Weaver, friend

“Roger was a quiet person who, unlike a lot of famous players, refused to capitalize on endorsements, because it would invade his family’s privacy.” – Jim McLaughlin, founder of Roger Maris Museum

“I still see him in my dreams. We lived together, we kidded around a lot, we enjoyed our time out there. Roger was a hell of a player, a Hall of Famer for sure in my book.” – Mickey Mantle

“I have so much respect for the man. For the mental part almost more than the physical. I mean, can you imagine what it’s like to hit 61 home runs in a season? In New York?” – Reggie Jackson

“We played against Maris when he was with Kansas City and Cleveland. He knocked me down at second base. He was the best in the league at breaking up the double play.” – Bobby Richardson

“I never saw him make one mistake in the outfield. I played with him every day and I watched him. And when I played against him in the ’64 World Series, the biggest surprise of the series for me was what a good centerfield he was.” – Mike Shannon

“You couldn’t play right field any better than Roger did. He could make every throw, play shallow, and then go get the ball. Roger Maris is probably the best ballplayer to ever play the game who isn’t in the Hall of Fame.” – Whitey Herzog

“One thing Roger had that players lack these days – more than some – was respect for the game and his teammates and the opposition.” – Tony Kubek

“Sometimes I wish I never hit those 61 home runs. All I want is to be treated like any other player. I never wanted all this hoopla. All I wanted is to be a good ballplayer, hit 25 or 30 homers, drive in around a hundred runs, hit .280, and help my club win pennants. I just wanted to be one of the guys, an average player with a good season.” – Roger Maris

After a two-year battle with lymphatic cancer, Roger Maris died December 14, 1985 in a Houston, Texas, hospital at the age of 51. Roger is buried at Holy Cross Catholic Cemetery, which is located at 1502 32nd Avenue North in Fargo, North Dakota. His diamond-shaped headstone depicts an image of the swinging left-hander with the caption “61, 61”. At the base of the stone is a simple inscription: “Against All Odds.”

Roger Maris received several awards and accomplished a number of achievements in his major league baseball career, including:

The Baseball City Hall of Fame, a self-proclaimed alternative organization to honor baseball legends the Hall of Fame has overlooked, has inducted Roger Maris and honors him among the greatest ever to play the game.

In a nod to the magnitude of Roger’s accomplishments, the National Baseball Hall of Fame includes Roger Maris artifacts. Permanently at Cooperstown are the bat Roger used to belt number 61, along with the immortalized baseball he hit off Tracy Stallard on October 1, 1961. His 1961 Yankees home jersey is also on display.

The Yankees retired #9, Maris’ uniform number, on July 21, 1984. A new Roger Maris plaque was also dedicated in Monument Park at Yankee Stadium. The plaque calls Maris, “A great player and author of one of the most remarkable chapters in the history of major league baseball.” Maris participated in the ceremony wearing a Yankee number 9 uniform.

How it All Began

Roger Maris: A Humble Athlete from the Start

Roger was born September 10, 1934, in Hibbing, Minnesota, moving with his family to Fargo when he was 10. After his sophomore year at Fargo High School, Roger began attending Shanley High School in Fargo. It was there that he began an incredible string of sports successes. Beginning in 1950, he competed in football, basketball, and track.

Former Shanley coach Sid Cichy once said that Maris was “obviously a gifted athlete. He could do everything, and he did do some pretty unusual things.” One of those was scoring four touchdowns on returns (kick, punt, interception) in one game, a high school football record that still stands. Roger’s skills as a high school running back even earned him a scholarship to the famed Oklahoma University football program, an opportunity he initially accepted but eventually passed up to remain in Fargo.

The Beginning of a Career

While football was Roger’s real passion, he played baseball for the American Legion team in Fargo. “Baseball was just something to do in the summer,” Roger once said. Playing outfield and pitcher from 1949 through 1951, he was voted Most Valuable Player in 1950 when he hit .367. Coach Leo Osman remembers Roger as something special: “He had a perfect eye and perfect timing. Roger was so sincere at wanting to get a hit instead of a walk that he’d swing away on the first pitch. He felt it was a disgrace to take a walk.”

Roger began his minor league career in the Class C Northern League. In 1953, just a year out of high school, he was recruited by the Cleveland organization and attended spring training in Daytona Beach, Florida. Despite being told by the organization’s farm club director that, “We never let a boy play in his hometown,” Roger persisted and eventually was wearing a Fargo-Moorhead Chicks uniform. Roger’s first season, where he batted .325 with nine home runs and 13 triples, earned him the league’s Rookie of the Year Award.

His value as a player established, Roger quickly moved on to the Class B Three-Eye League in Keokuk, Iowa, for the 1954 season. Class AA Tulsa (Oklahoma) of the Texas League quickly followed, and he also played in Tulsa and Reading, Pennsylvania. His stay at Indianapolis, Indiana, however, solidified his potential as a major leaguer. In that 1956 season, Roger batted .293, hit 17 homers, drove in 75 runs, and helped carry the club to the Little World Series championship.

Roger’s experience in the minor leagues led him to make a personal change. Although his family’s name was “Maras,” he changed his name to “Maris” in 1955 to avoid unflattering chants from fans who were bent on rhyming his last name.

Off to the Big Leagues

The Cleveland organization had signed Maris in 1953 for $15,000 plus a $10,000 bonus if he made it to the majors. His performance made that look like a steal, and he began the 1957 season with the Cleveland Indians in the big leagues. Roger was traded to the Kansas City in the off-season, and enjoyed a stellar season in 1958 before being traded to New York.